I love Pooh, especially the BD (before Disney) drawings of him. This book contains a bunch of stories about Pooh and his friends, introducing them and their quirks one by one. They show how Pooh really loves his honey, Piglet fears nearly everything -- especially when it actually does happen, Rabbit doesn't really like anyone but he wants his friend around anyway, Eeyore, well... he doesn't like anything and doesn't ever see the bright or sunny side of it. They all have their own way of dealing with things and seeing them in a certain way, and they all stay friends. They set a good example ;)

View all my reviews 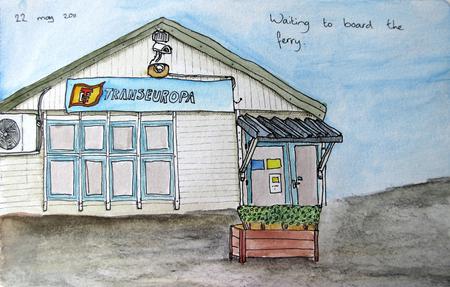 I recently went on a trip to the UK and made a few drawings. This first one I made while we waited for the ferry to cross over with. As a kid I got sea-sick a lot so this trip gave me the opportunity to see if I'd still get sea-sick. See how I try to give it a positive twist? 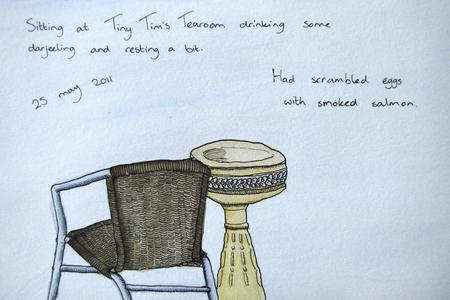 We had some afternoon tea and some food at Tiny Tim's Tearoom where I made a drawing of a chair and a birth-bath. Halfway through my drawing things got moved. 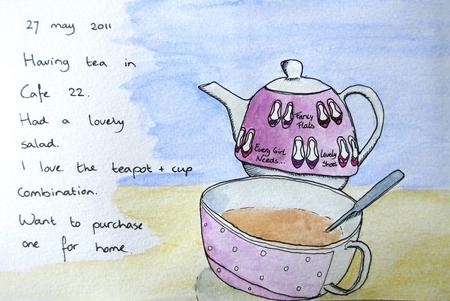 Another time we had tea and food at Cafe 22. I loved the little teapot/cup set and we searched around for them at the shops, but couldn't find them. I ended up ordering a set over the internet, ah well. 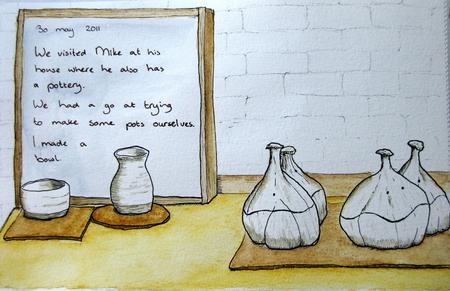 We also visited Mike and his husband and played around in the pottery. I messed up a few times and still ended up with a cute little bowl. Hurray! 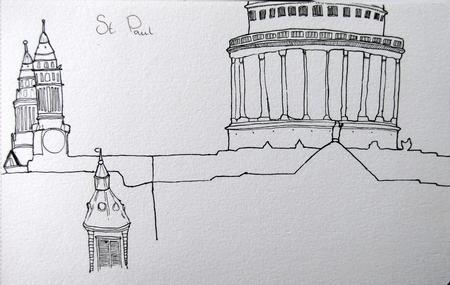 We went to London for a bit too and I tried drawing St. Paul's Cathedral from Tate Modern. Lots of wind, so my pens rolled of the table and my pages flipped over. That, and I misguessed the amount of space I needed. Ah, well :) 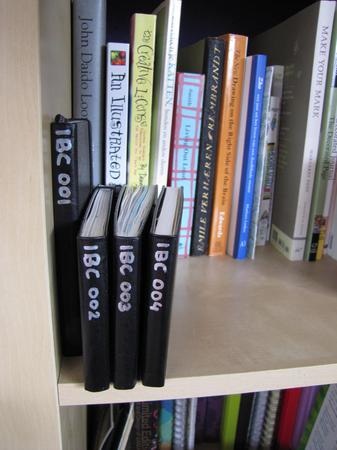 I have filled up three little books with my Inkblobs. The fourth has the writing on the outside and no drawings yet.

I think I'll fill it up pretty soon and then on to the fifth. And a sixth, and probably a seventh and so on.

Clearing out my bookshelves, just in case I have lots of them next year. One has to prepare for these things :)

Lately I have spent a lot of time de-cluttering (not done yet, it takes a long time to get rid of years worth of junk). It feel very liberating to throw out old stuff, stuff I don't even like or just keep out of guilt. It not only clears space, but also my head. It makes me very happy.

To help me and keep me motivated, I've started reading blogs about getting rid of clutter basically. I found a good list of tips over at 'Simple. Organized. Life.' As a recovering pack-rat I found the first two most helpful.

Having a place for everything (well, not yet, but getting there) helps me not having to search for an item. Tossing out something when I bring in something new helps me to not cling onto older items just for the sake of clinging on.

I've started feeling much calmer with less clutter around me. A lot less stress. 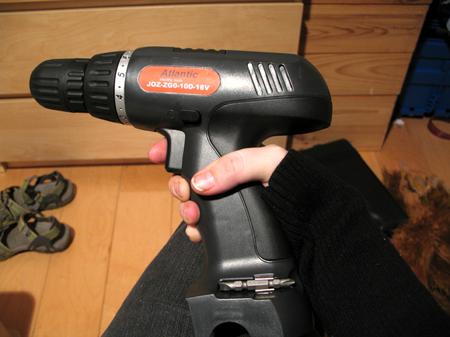 I don't do anything for Valentines Day. If I feel the need to do something special, I just do it, I don't wait until that one day per year. Boyfriend and I joked about it and he spent most of the day on his knees with another guy, getting all hot and sweaty while filming it.

Anyway, after he finished that and cleaned up the mess, he gave me a gift. My very own cordless screwdriver! Guess who'll put her Ikea-things together with it from now on. :D

For those of you who consider this very unromantic, too bad! I love it! Had he brought me a bunch of roses I'd have smacked him on the head with it. Pretty painful with those thorns and such. 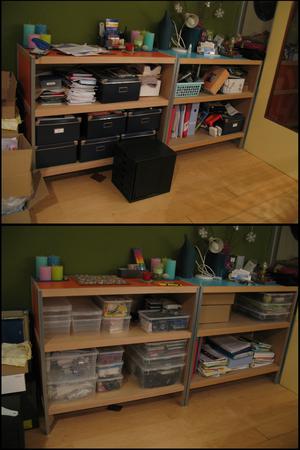 I have this habit of stuffing things in my cabinets and forget about them. Hidden behind the doors I don't see it, so I don't think about it, or so I hope. But it never works like that. So, today I took an hour or so to declutter my two cabinets in the livingroom. I still have one left (my 'computercentre' basically), and feel very good about the progress I made today. The photo shows the before on top and the after at the bottom. I made a few paperwork-stacks that need to migrate to my file-cabinet, a task to big for this evening. I'll take another hour (or two or three) or so later this week to do it.

I put some drawingsupplies in the cabinet on the left (top-right), and consider putting my yarn and crochet things there too. I crochet in the livingroom, not in my hobby/bedroom (aka 'the funroom' ;) )

I tossed out one full garbagebag.

I couldn't help myself, I redesigned the site. I like the previous design but it looked too messy. I had trouble reading stuff and finding stuff, and I designed the whole thing. mmm purple 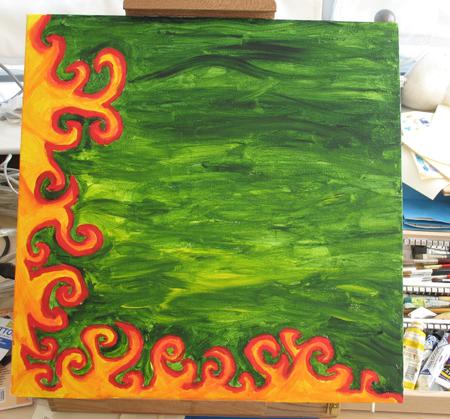 Getting back on my feet from my little RA-blow takes a bit longer than expected. I have received medication that works (fabulously) and all seemed to go well again, until this itsy bitsy thing with a low amount of white blood-cells popped up, which made the doctors stop the medication. My white count went up again, so last week I restarted treatment, yaay.

I have not completely abandoned my creative projects either, I have made some nice photos and I started the painting in the picture (stuck with it now, though). I also have bought a sewing machine and managed to sew up a skirt, a dress and a top. It just goes a bit slow.

In October 2006 my new doctor told me I had rheumatoid arthritis. I had experienced frequent pains in my hands and my feet in the months before and my lung-specialist referred me to a rheumatologist. I have since said good-bye to the lung-specialist, not my lungs but my stomach has caused the ongoing cough which made me visit him. I have not yet said good-bye to the rheumatologist and I most likely will not for a long time.

Hearing I have rheumatoid arthritis did come as a bit of shock, even if I knew I had something (the frequent pains and morning stiffness certainly didn't fit my age (fyi: 27)). We started treatment straight away and I now take 15mg of methotrexate weekly. Methotrexate started out as a treatment for cancer (and falls under 'chemo') and works well against auto-immune diseases such as rheumatoid arthritis. Though different people have different experiences, by default, doctors start with methotrexate to stop the disease in its tracks and prevent (further) damage. It has worked but the effect seems to have started to wear off. Nothing to panic about, I have more doctors appointments next week.

I read up a little about rheumatoid arthritis and found that currently, doctors want to treat it as soon as possible because they want to prevent damage to the joints, which apparently can and does occur in the first two years of the disease. I also found out that rheumatoid arthritis does not only affect the joints, it can also cause complications in the eyes and mouth and several other parts of the human body. Due to its nature, it also cause general problems such as fatigue, concentration problems, forgetfulness, sleeping problems, change of appetite. The side-effects of the medications for the disease can also cause and/or worsen these problems.

Of course I found a few sites with stories of people with rheumatoid arthritis and most of them I honestly found very depressing. I strongly believe that your mindset with a chronic illness/condition can help you a lot. It can also sabotage you should you have lost hope and consider your condition a 'delayed death-sentence'. Some days you feel bad, some days you feel good. I believe the focus should lie on the good days.

Yes, I have cried and felt really bad. Yes, I have had terrible pain one of which made me end up in the ER at Christmas. Later we discovered it had nothing to do with the rheumatoid arthritis, and it could have happened to anyone. The frustration the pain and the limited movability brings has brought me to tears and in a very sad mood. And I refuse to let it become more than that. I will not let it go beyond 'a very sad mood'. I will not stay home and soak in my own tears and not work and feel bad. I get out of bed every morning, sometimes it just takes very long.

In the end, the result counts. The 'how' only counts if I found a really cool and creative way to do a seemingly easy task. Anything I used to do, I can still do. It may take longer, but I can still do. And that, I'll never give up.

As for the title of this post: if in a year or two or twenty, my legs got damaged, and I started to limp, if my eyes got affected and I can't really see, if my hair falls out from the medication, I'll buy a bandana, and wear an eye-patch. I'll limp through live either with or without a wooden leg. I'll buy a parrot, and go sail the warm seas. 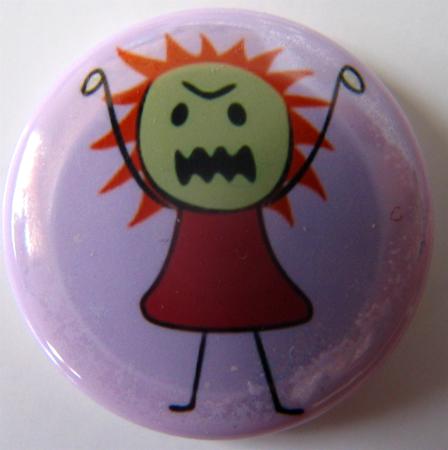 I need to make more buttons... 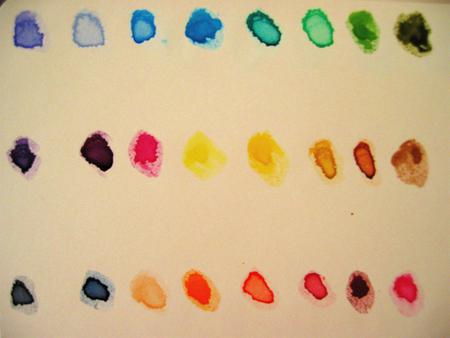 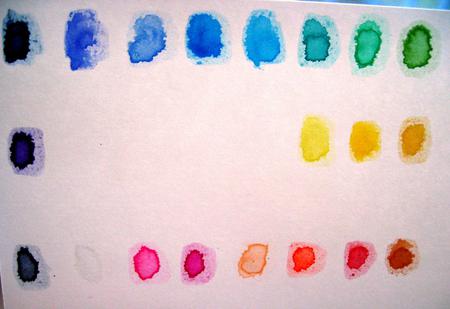 Currently, I have these colours in my paintbox, in this order. I still have four openings (maybe 5, I also have chinese white in a tube) and wonder what colours to add. What colours shall I add? I think I could use some orange, a lighter blue-purple and maybe some darker greyer brown and green. Ideas?