Earlier this year I bought the Plannerism Planner because I liked the idea of having a planner that helped me set goals. I used it for a few months and enjoyed it, but found the paper not working quite well with my fountain pens and ink. So I strayed.

I bought a Leuchtturm1917 Academic Week Planner because I got hooked on the columns. And Leuchtturms have paper that works well with fountain pens and inks.

But that didn't do it for me either. Sure, the paper works great, I get excellent shading, I don't have to look at what pen I grab 'cause they all 'work'. The drying time started to annoy me after the short Saturday / Sunday columns did. I have plans on Saturday and Sunday too, people! Do other people not do anything in the weekend? Of course they do, they make plans too (some even with me). I really don't understand why planner/agenda-makers insist on keeping the weekend short, and tiny.

I figured, because I loved the Plannerism format so much, I should spend some times testing inks and pens and work out a system for me. I don't mind having dedicated planner-pens, and as I colour-code my type of appointments I could do with a fixed set of inks. In fact, that seemed best anyway, just one red, one orange, one blue. Not switching them around every week. Helps me to not have to think about what colour means what. Saving some brain-bandwidth for more important things, yay!

The colours/inks that worked best for me:

All these inks performed well (or well enough ;) ) on the paper, with little to no bleed-through. I like the colours too.I had some issues with the Iroshizuku, which I think has more to do with the pen than the ink. I've tried several Iroshizuku inks and they all flow easily, but this one in this pen just won't write well. It flowed fine in another pen, so I think I'll just take out the ink, thoroughly clean the pen and try again.

Noodler's Habanero bled more than it did in my earlier tests. The pen did also write a bit wetter than before. I did have it in my bag and tossed it around, which may explain it. I don't mind this level of bleedthrough with one of the colours.The Platinum Preppy Purple shows similar point-bleedthrough, also not a problem for me.

On the second photo can clearly see the bleedthrough of Sheaffer Turquoise, as expected. I don't feel comfortable with this level of bleedthrough, it makes writing on both sides more difficult. The Fox Red behaves only slightly better. I won't use these pens / inks in my planner. In all fairness, Fox Red also bled through in my Leuchtturm1917 planner, in a similar way, so all in all, not too bad.

The entire page, front and back.

Sheaffer Turquoise clearly bleeding through, as does Diamine Aqua Lagoon (in a wet pen). Noodler's BSiAR does surprisingly well for an italic nib, and of course, bleeds through. Some of the others do as well (or as bad) as Habanero, but still a bit too much for me. As expected, Scabiosa performs well. Even though I used F/FA/EF some inks still bled through too much (Navajo Turquoise, Syrah, Ambre de Birmanie, Bouquet d'Antan). R&K Alt-bordeaux in the Studio with M-nib performed better, it would most likely work fine in an F.

As an extra test, I made little patches of each colour. The Iroshizuku had start issues even though I had used it minutes before (suspected pen-issue, not the ink). The patches did not bleed.

Glitter pink gelly rolls have their place too. Also used the Sheaffer Turquoise with the EF-nib I have for the 580. Worked better, but I think the colour looks less cool. 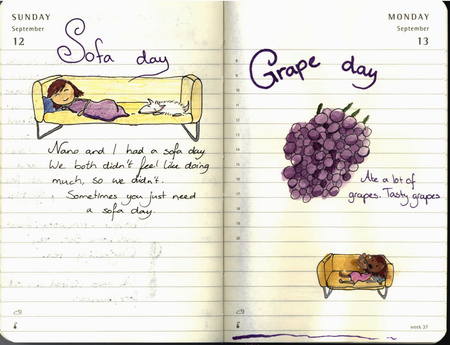 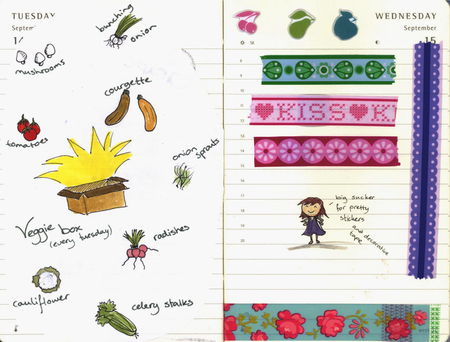 After the sofa day came a grape day, on which I ate a lot of grapes and messed up the colouring of my drawing. I suddenly turned brown!

It had nothing to do with the grapes, I just messed up the drawing.

On tuesday my veggie-box arrived with fresh new veggies! It always feels like a little surprise-package. On Wednesday I did my grocery-shopping at the mall and treated myself to a few stickers and some decorative tape, aaah. It looks so shiny and pretty.