( with a sauce of caramel and sweet chili, and some chocolate sprinkles. ) 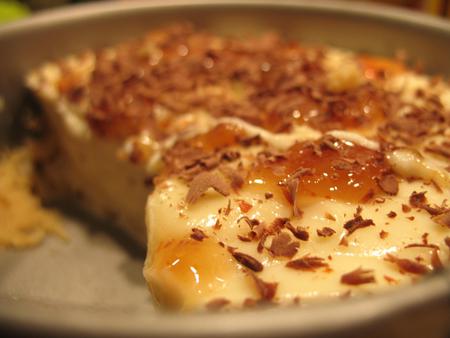 Make biscuit bottom (I used readymade, happened to have it...)

Melt chocolate au bain marie, mix in cheese, put in cakeform. Layer over biscuit bottom, put in fridge for an hour or two.

Mix sweet chili sauce with caramel and drip over cake.

Trying to imitate the Wagamama version ;) It turned out slightly runny, but not too bad. Tips to firm it up appreciated.

I came up with a random casserole recipe by just tossing stuff together. I have tons of cans with food from my compulsive food-buying so I just mixed what I thought would work (my cans are mostly 1 person portions):

I mixed everything together apart from the cheese, put it into oven-dishes, and topped it with cheese. My cans contained about 200 grams of lentils / beans (about 7 US-oz). The soup was a one-person portion, around 230ml / 7.5oz. I don't think the exact amount really matters, the general idea / proportion counts more. I think replacing either the lentils or beans with ground beef/pork will also work pretty well (I want to try a tofu version some time soon).

I just love courgette and mushroom...

I did forget to season it with pepper and salt and herbs, but it tasted pretty good just like this, probably thanks to the soup being already seasoned. I liked the mixture of creamy soup and tomato sauce.

I ate a tasty portion, put another in my bento for tomorrows lunch and have two portions left for later in the week / freezer. Normally this would make two portions I think. Or maybe one and a half.

My first attempt to cook from my pantry has turned out pretty well. Very pleased :D

Now I have to think of something to cook with my forgotten-but-stil-ok small sweet peppers...

I still have issues eating bread, so I've made a bit of my own (totally abused my rice-cooker for it too!). I like pita-breads, they seem to work well, so I searched for a recipe and found one. I will cut the recipe into 1/3 (this worked pretty well with my previous bread), because 1/4 means too many calculations and weird things (call me lazy ;) ).

They'll fit in my bento too!

I've missed eating pizza since surgery. I did, a few times, but it only went well if I ate take-away pizza from one of those pizza places, not the kind I can buy in the supermarket. I could only eat 2 or 3 slices, and it seems a bit expensive to order in and only eat 1/4 of the pizza. It has to do with the dough, although I don't know the details of why it doesn't go well. Can't eat bread either, same problem. I get really ill.

Today I made a most excellent discovery. Gordita's (small, thicker tortilla wraps) work really well as a pizza-bottom. I tossed on some tomato sauce, chopped up veggies and mushrooms, added shredded cheese and popped the whole thing in the oven for 15 minutes.

Best pizza I ever had.

So I made another one just now. Two pizza's in one day. I like to spoil myself. 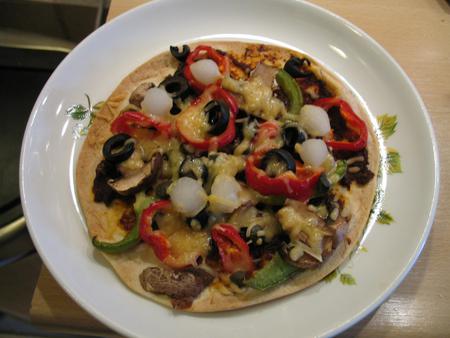