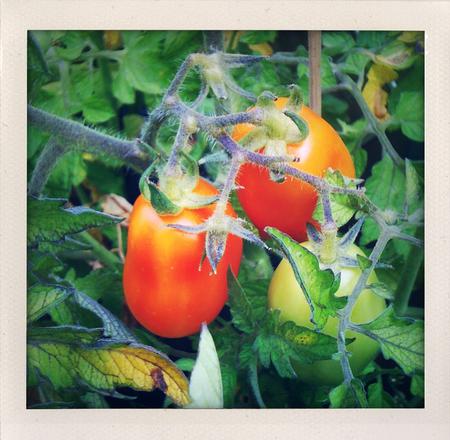 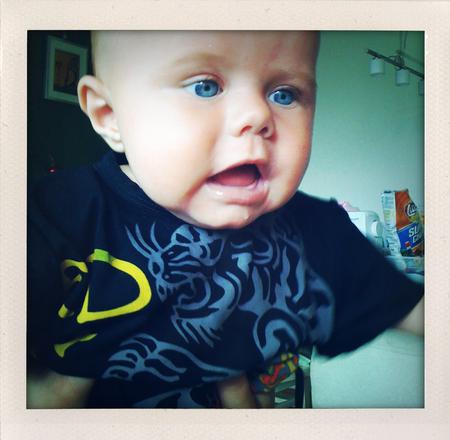 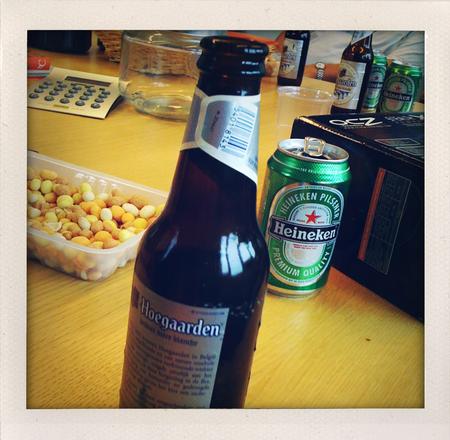 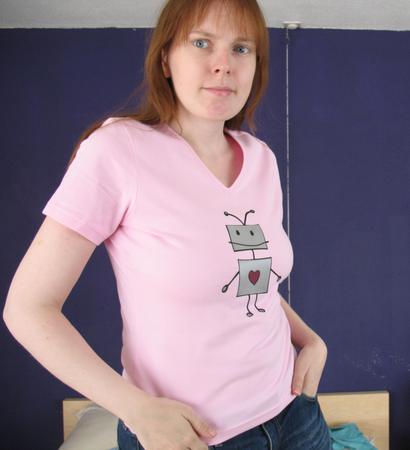 I like the fabric and it fits nicely. The robot has reflector silver (oooh shiny!) and a dark-red heart. I love it already! 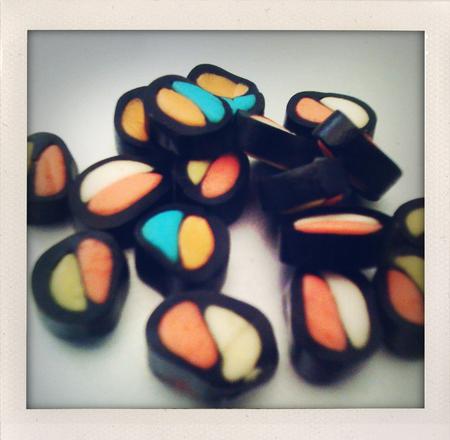 Ate too many of them. Nauseous now. 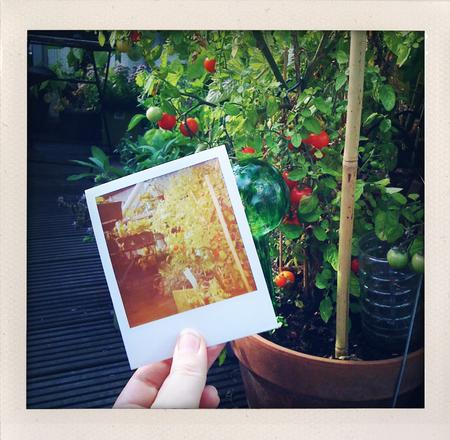 I found my old Polaroid camera which still had film in it. 7 shots left after I took this one.

And then ofcourse I took one with shakeitphoto of the real Polaroid. Maybe I should take another Polaroid of that. To infinity.... 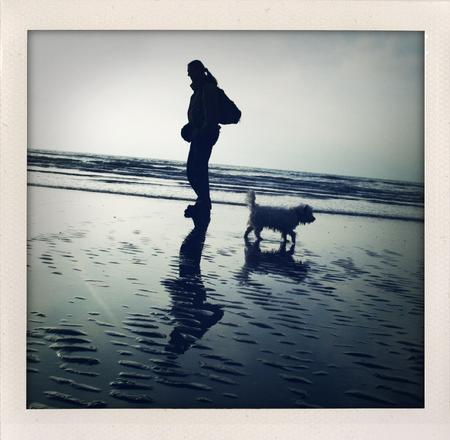 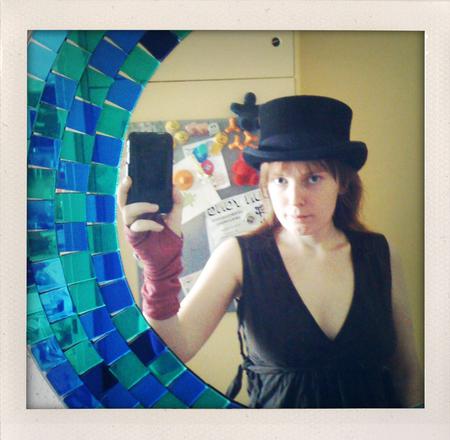 I love that mirror. 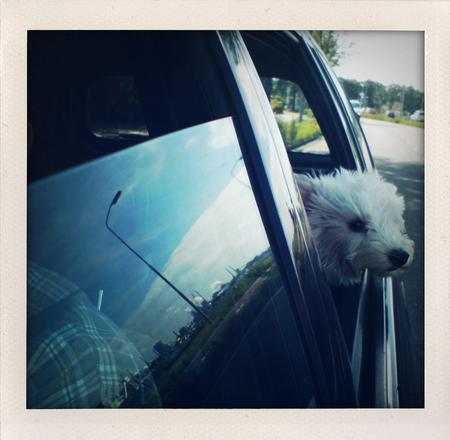 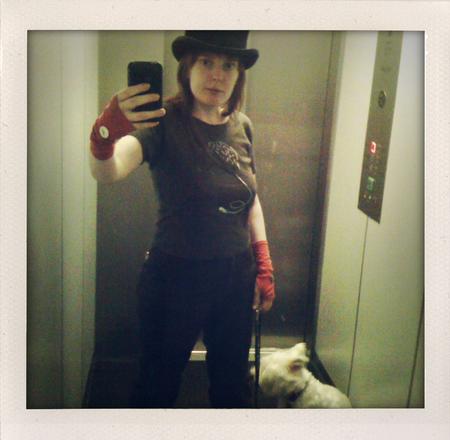 I love the grainy old look. Have to admit the light in the lift has had a role in how this photo came out, still love it though :) 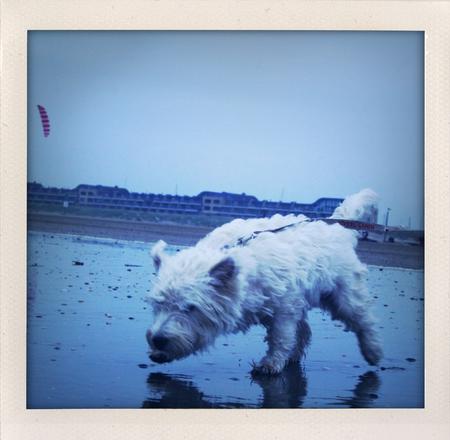 My mom commented recently about how many digital cameras I have. I have my trusty Canon Powershot A620, an older Canon Ixus 400 and a Minolta Dimage 5, plus ofcourse the Sony Ericsson K810i phone and my iPhone. She didn't notice The Other Cameras, all analogue. I have two Lomo LCA's (one old, it says 'USSR' and a newer one) with a macro, tunnelvision and fisheye lens and a colour-flash, a transparent actionsampler, a pop9, an orange supersampler, a Polaroid 600 and a Polaroid i-zone. I may still have forgotten some (my Kodak Brownie comes to mind). One might say I have too many cameras, and I cannot disagree there.

I loved and love making photos, of ordinary stuff, of strange things, of my dog. I'll make functional photos (of my garden) but I have a thing for the randomness of just shooting (the Lomo-philosophy, basically). Buying film and having it developed and cross-processed and all costs a lot of money (not to mention the nasty chemicals). As my main camera I've used a digital one since around 2002 (had one before, but didn't mainly use it), which has that 'instant' effect that I love. I've also absolutely loved my phone's camera, despite its lack in quality, or perhaps because of that. On my trip through Europe, years ago, I snapped a bunch of photos with my phone-camera and send them as a collage on a postcard.

Yesterday I browsed around and looked for a few iPhone-apps that would satisfy my 'funky' need. I had already downloaded and used QuadCamera which reminded me of my old actionsampler (and the supersampler). I also found CameraBag to add some effects to photos (some vignetting, adjustment in colour etc) as well as CameraKit. And ofcourse several Polaraid Apps of which I currently like ShakeItPhoto the most. The part of me that enjoyed my analogue cameras so much has awoken and bounces up and down, left and right, off the walls. I wonder how much sleep I'll get tonight... 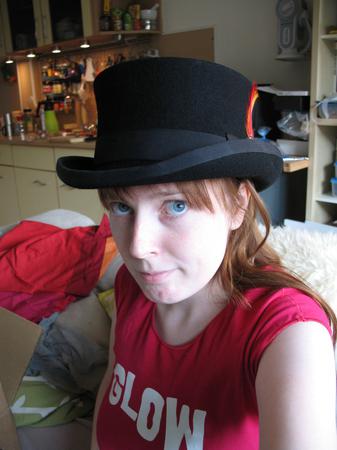 I have no idea when my love for hats started, somewhere before my teen-years for sure. I never did really wear them, my head was usually too round to fit them properly. I wore baseball caps, and that was about it. For a very long time I wanted a black top-hat, almost like a magician's but a bit shorter. Too long seemed a bit impractical. For years I'd browse hat-stores every once in a while, and when I got internet I googled them. Up until this week I never found (perhaps I lacked the google-foo) the hat that I wanted. Either they were too high, or too expensive. I wouldn't dare to go out on the street with an expensive hat, so it had to cost a fair amount, not a ridiculous amount.

And this week, I found it. The perfect hat. With a feather. It arrived today and it is awesome. So very awesome. I never want to take it of again. 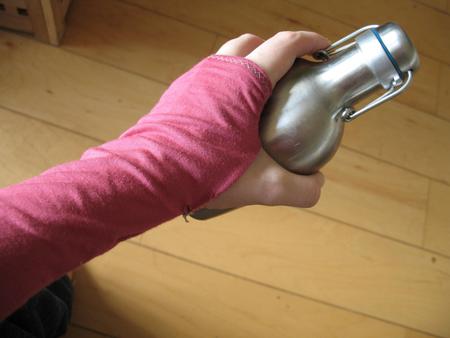 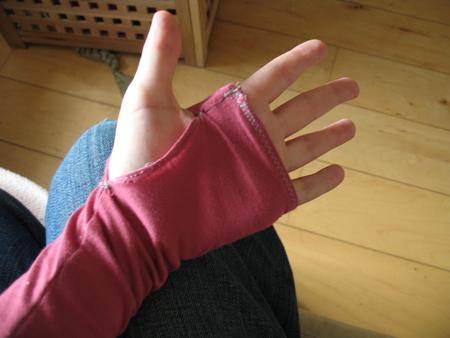 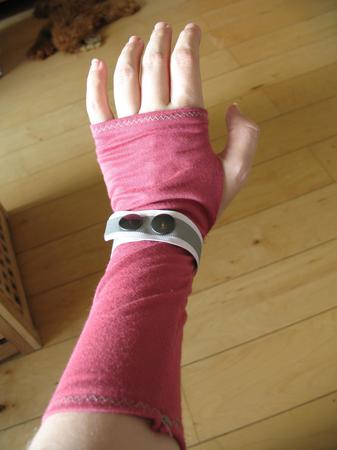 Annoyed with my too long trousers (happens often, I have short legs) I whipped out my trusty sewing-machine and fixed that problem in two minutes. Fold, sew, cut excess fabric, didn't bother with anything fancy (though it doesn't look very bad). I aim for a virtual no-viewing policy in that area, not sure if that'll work out, but we'll see. Don't know why anyone would go stare at my hems anyway.

So, while I had the machine out, I decided to make some arm-warmers / gauntlets / watchacallems to wear with my t-shirts. I simply took a bit of fabric in the desired length, measured the width of my hand (ex thumb), took the width twice and cut it out. Then I hemmed all sides to make it easier to handle, and after that folded it, sewing the long sides together with an opening for my thumb. Looking online I found an easy tutorial explaining almost exactly what I did (differences don't really matter anyway).

For fun, I also made myself a little reflector-wristband with push-buttons. Considering stitching something on it... 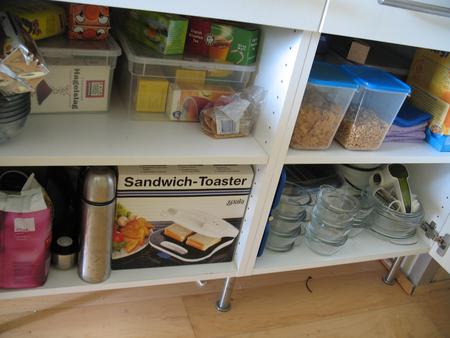 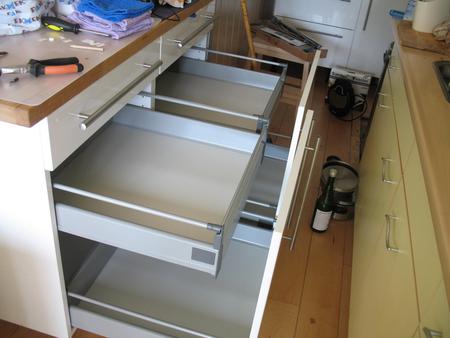 For a long time some (most) of my kitchencabinets have annoyed me. I cannot imagine why today, kitchen-makers still default to shelves for the bottom cabinets. Shelves below the waist, so if you want to get something out, you have to kneel down, and dive in. With my knees, often plagued by pains and swelling because of the RA, this quickly became such a painful event that I rather left everything on the counters than store it in the cabinet. Not precisely the most handy thing to do.

But no more! Today we fixed my two main cabinets with drawers. I could have replaced the front bit as well, having 'real' drawer-fronts, but I chose to use the old door instead, saving a bit of money along the way. The installation went smoothly and using the doors worked as expected. So now I have fancy drawers, instead of messy shelves. I still have to put all the stuff back, and probably move around a few things for easy access, however, I already feel thrilled about it. The access has become much easier, I don't have to lean over or around the door anymore and I don't have to sit on my knees either.

This will make it so much easier for me to access things. I still have to do the bit by the kitchen-sink (those yellow things), the cabinets there need replacing and I will replace them with similar ones as these. I already found a kitchen-sink-cabinet with a drawer and have eliminated enough stuff from under the kitchen-sink (only frequently used cleaning-supplies, the infrequent used supplies have their place in the hallway-closet) to have a pretty good idea that a drawer will also work. I think they come with one, at the bottom, but possibly also with another (half) one halfway. Either will work great!

Have already started saving for it, it'll take more time and money to get that bit done, but after that, I'll have redone the entire kitchen :)