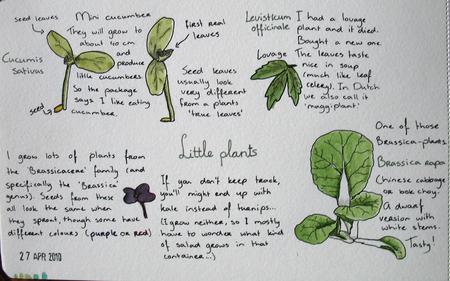 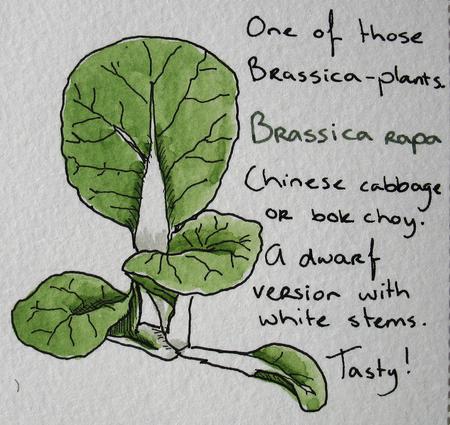 A few days ago Michael Nobbs released his two booklet (Start to draw your life and 75 ways to draw more, previously released as make-it-yourself-booklets) as a combined updated and free eBook. Naturally I downloaded it. And almost just as naturally I didn't draw.

Today however I decided to take action. After putting dinner in the oven (courgette filled with quinoa, tomatoes, spring onions and some cheese) I grabbed my moleskine -- somehow I wanted to draw in that instead of my regular book, so I went with the flow and used it -- and drew my mini cucumber plants. Not only will the plants stay mini, they'll also produce mini cucumbers. I like mini plants, and mini fruits and veggies.

I then popped out on the balcony, drew a lovage leaf, and a recently sprouted mustard-plant (at least, I think it'll become a mustard-plant, but with brassicas, you never know...). After that I drew one of my bok choy plants, also the mini version (with a small balcony you have to work as space-efficient as you can). I like how it turned out.

And dinner only burnt a little bit.