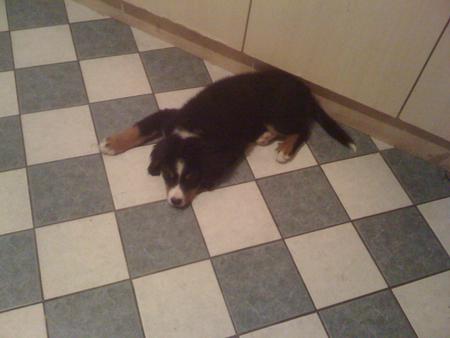 Denzel is a couple of months old now. I took this (terrible) photo a few weeks ago at sister's birthday party. Somewhat over a week ago sister, her boyfriend and their two dogs went out with the dogs to play. They found a spot where another guy and his dog were playing (throwing a stick, bring it back). The dogs happily played together and the guy happily threw the stick. At some point he swings his arm back, ready to throw the stick and just as he swings it low, Denzel jumps in front of him and gets the stick full in his face, knocking him out. Sister cried, guy cried, emergency visit to vet. Denzel had blood coming out of his nose, his jaw swelled up and his eye got 'bloody' as well. Pretty bad all in all (combined with going KO). The vet thoroughly checked him out (and gave him medication) and sister had to wake up the dog every hour that night. He had a pretty bad concussion, and swelling / bruising, but should make a full recovery.

The good part about this story, apart from his recovery (it still happened recently, but I expect the worst has passed and hopefully he won't have any permanent damage): the guy paid for the veterinarian costs and kept in touch about Denzel's health. Last I heard they were going to visit him (or he would come around) to make sure the dog indeed got a bit better.

Can only imagine what that guy felt like, and certainly can relate to sister (a little bit, Nano has had minor incidents so far knock on wood). It shows some people still take their responsibility and don't hide behind 'but it was an accident!'. So, bravo, anonymous-guy!