Yesterday wore me out, I fell asleep after dinner (again) and slept till morning (again) on the sofa (again, much warmer than the bedroom).

I spent most of the day continuing to not move much on the sofa. I did take a lot of time finding the perfect backpack for me. My other backpacks still work fine, so technically I probably shouldn't buy yet another one (but I still have less backpacks than most women purses or shoes! so ha). My daypack can hold up to 20 liters, which suffices for either groceries or going anywhere and bringing my own food and drinks (some of it at least), but not both at the same time, which means I can't decide to pop buy the store after work (I'll start work again soon, so I will want to buy food on my way home to save time and travel)

My other, slightly larger backpack, could probably do both, but borderline, with its (I think) 23 litres. It would get tight but would fit with not too many groceries. It feels a bit uncomfortable though, when it gets heavy. It's more or less very handy for clothes and laptop, but not so much for groceries. The hip-band doesn't do much for distributing the weight. 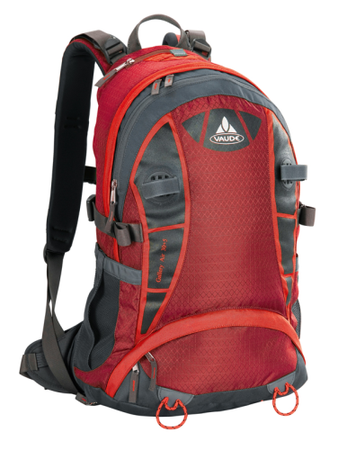 So I found the Vaude Gallery Air. It holds about 30 litres (a bit much, yes) but has straps to tighten it, so it becomes more flat. It has a raincoat (yay) and can expand with an extra 5 litres (yay). It has a great back (I have the same thing on my really large backpack) so you can have ventilation between your back and the pack, or wear it tightly to your back.

I needed a thermos (yes, needed, I don't drink as fast as normal people and with a thermos I can take my time and still enjoy a hot beverage), I looked around at Siggs and found the Metro Mug. It holds 380ml or 13oz which means I can take a pretty large amount of hot beverage or soup (maybe even stew) to work with me. Or, I bring soup, have that, and fill it up with hot tea and milk at work. Win-win! Mmmm tea with milk.

I also ordered a normal water bottle, even though I won't drink water from it. It comes with its own cup. I could use it for beverages that don't need to stay that hot or cold. It has an optional neoprene jacket to keep it cooler / warmer for a longer time, so I may purchase that if needed. Or, I could just fill it up with booze ;)

I have plenty of containers to bring food in, and after searching found a handy small ovendish that I'll bring along to work as well, in case I need to heat something up (I don't like heating stuff up in plastic, eek). I have several and should it break I won't cry over it.

So, my survival kit will contain: - nifty backpack - Metro Mug, with soup or tea with milk (mmm) - waterbottle+cup with some other beverage - about 3 portions of food / snacks, either in mr Bento or in my separate containers - cuttelery (possibly getting a new set for this) - cloth/towel, for drying used stuff and wipe hands with (might just cut up an old t-shirt for this) - ziploc bag with medication (1 dose MTX, 1 dose folic acid, several naproxen / paracetamol, 2 dose of plaquenil, spare set of contacts, small bottle of disinfectant for hands, 2 sachets of ORS salts, 1 (lip)balm and I probably forgot something) - with the weather probably safe to add extra set of gloves, hat, scarf, jumper of some sort, extra pair of socks

Just the basics. At least I can say, I've come prepared...

At first I thought I wanted to bring too much, but the more I think about it, the more I know I've only listed the bare minimum.....